So first I would like to thanks everyone for their interest and support for the EFL-port of WebKit. People have been asking me for some screenshots, so I made one.

It doesn't look like much as our test browser doesn't even have an address field yet, but at least it shows that I have logged into my google account and that it is possible to use Google Reader :-) 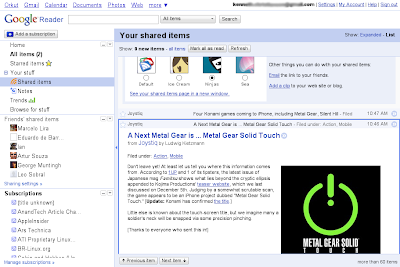 Later I hope to do a nice browser demo using Edje, if someone else doesn't step up and does it.

Anyway, we also got our first patch today from Cedric Bail that fixes some crashes he had running on his system. Really nice knowing that people are already playing around with the code!

EDIT: People asked me how to get and compile the code, well it is easy:

In order to test, you can run the test launcher:
Posted by Kenneth Rohde Christiansen at 5:36 PM 108 comments:

So, the last month and a half I have been porting WebKit to the EFL libraries. It has been something that I wanted to do for a long time, but due to other projects I never got around to it. It has been a very interesting last month and a half and it is very gratifying having something that is already usable :-) I hope that now vtorri (from #edevelop on freenode) will be very happy as he have encouraged me to do the port for I think about half a year.

Some of our Manaus-based guys were already looking at doing the port so I went one month to the tropical rain forest to get the port really going. A lot of things are already working, some things ain't, like keyboard input, but we're looking into that. Just be patient :-)

If people are interested the code lived in the kenneth/efl-port branch of git://code.staikos.net/webkit - and thus shares place with the Qt port.

Now begins the work on improving the code, getting it reviewed and sometime in the future getting it all upstream!